Is the Bible the Word of God? 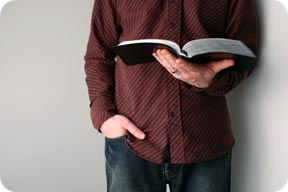 The Bible is the best selling book of all time by a very wide margin with approximately 6 Billion copies in print. What is it that brings people to depend on this book? If the Bible is merely a book of helpful moral guidance and philosophy written by humans, then we can pick and choose what we want to believe. If it is actually God's word to us, then we should let it transform our lives. The evidence is overwhelming that the Bible is totally authentic in what it claims to be--the actual Word of God.

The Bible is an incredibly unified piece of literature. It was written over a 1,500 year time period by over 40 different authors from various backgrounds and cultures, in 13 different countries, in 3 different languages, and in many different literary styles. Despite all of that, it contains one consistent theme from cover to cover, which is God's plan for the salvation of mankind.

It is appropriate to call the Bible the Word of God because that is what the Bible itself claims. "All Scripture is inspired by God and is useful to teach us what is true and to make us realize what is wrong in our lives. It straightens us out and teaches us to do what is right." (2 Timothy 3:16) The Bible was physically written by men by the inspiration of God (Hebrews 1:1). In other words, God used men to write exactly what He wanted to say. The writers are clearly claiming to be speaking from God as hundreds of times they use expressions like "says the Lord", "declares the Lord", "God said", and "The word of the Lord came to me". The ways in which God spoke to the writers included dreams (Genesis 37:1-11), visions (Daniel 7), audible voice (1 Samuel 3), inner voice (Hosea 1), and through angels (Genesis 19:1-29).

The Bible is also historically accurate. The events that took place, the places that are involved, and the people who are written about are confirmed by the majority of historians from thousands of years ago until today. Skeptics even agree that the New Testament is an outstanding account of history. The reason being is that the eyewitnesses were careful to record all the details accurately. For example, in Luke 1:1-3, it is noted that they "carefully investigated everything".

Importantly, the writers of the New Testament affirmed the unique history presented In the Old Testament. For example, Jesus confirms historical events such as the creation of man and women (Matthew 19:4), Jonah being swallowed by a giant fish (Matthew 12:40), and the flood in Noah's day (Matthew 24:37-39).

The Bible is completely accurate in all scientific facts. The amazing part is that all these facts were written many hundred years before human discovery. Only an all-knowing God could inspire these things to be written. Here are some examples:

Thousands Of Accurate Predictions Without Error

Another thing that separates the Bible from any other book is the fulfilled prophecies (predictions) of future events. It contains over 2000 prophecies (300 about Jesus) that have come true without even one error. It is virtually statistically impossible that the Bible's specific, detailed predictions could have happened by chance. It has been historically proven that the predictions were documented long before these events occurred. For example, the book of Daniel contains many specific prophecies that have been fulfilled in history, including:

Predictions About Jesus Have Come True

Micah predicted that the Messiah would be born in Bethlehem (Micah 5:2). Daniel predicted when the Jesus would appear and be put to death (Daniel 9:24-26). Isaiah predicted over 500 years before Jesus was born that the Messiah would be virgin born (Isaiah 7:14) and He would be crucified with criminals (Isaiah 53:12). Some other prophecies include: The exact words Jesus spoke on the cross were predicted (Psalm 22:1), the piercing of His hands and feet on the cross (Psalm 22:16), and the soldiers' gambling for His clothes. (Psalm 22:18) These things were predicted about 400 years before crucifixion was even invented. Jesus even predicted His own death and resurrection (John 2:19-22). These are not general predictions, but incredibly specific. For any of them to come true would be almost impossible, never mind all of them. The Bible says "For prophecy never had its origin in the will of man, but men spoke from God as they were carried along by the Holy Spirit" (2 Peter 1:21).

Most critics of the Bible are people who haven't taken the time to read it or study it. In fact, many critics who tried to disprove the Bible are now some if it's biggest supporters. It is a supernatural book that can radically change a person. "For the Word of God is full of living power. It is sharper than the sharpest knife, cutting deep into our innermost thoughts and desires. It exposes us for what we really are." (Hebrews 4:12) This same book has the power to help people who are suffering, save people from their sin, give us direction in life, and satisfy our intellect. The Word of God has healed marriages, rescued people from addictions, given people reason to live, mended hearts and changed countless of other seemingly hopeless situations. See for yourself some examples of radically changed lives.

Worth Believing Due To Overwhelming Evidence

Upon close examination, it is clear that the Bible claims and proves to be the Word of God. Every scientific, historical, and prophetic word written reveals the accuracy and uniqueness of the Bible. That is reason enough to believe and follow God's Word at all times and with all of our heart. Jesus said "People need more than bread for their life; they must feed on every word of God." (Matthew 4:4)

If you agree that the Bible is reliable and true, please know what it says about your eternal destiny. The Bible says that your sin has separated you from God (Isaiah 59:2) and that you will die in your sins (John 8:21) and be sent to Hell (Luke 5:12) unless you repent (turn from your sins) (Luke 13:3) and place your trust in Jesus Christ (John 1:12) as the One who died on the cross to pay for your sins (1 Peter 2:24) and allow you to enter Heaven when you die. Life is short and you never know how many days you have left to live. Today is the day of salvation.

Related Questions
How can I be saved?
Am I a Christian?
How do I know if God saved me?